my days as an epic'd out prot warrior are numbered

I got a note the other day letting me know that my tri-monthly subscription to WoW was successfully paid and that I was free to continue playing until September 8th.

Don't know what it was, but that made me realize that playing the game isn't really fun anymore and that while the expansion offers hope of change and some freshness:

1) there's still no hint as to when it will be released
2) the shine will wear off in a month, then it's back to the grind and scanning patch notes to try and figure out where the cheese got moved to this time

The fact is, I've done everything that I wanted to do in WoW. I've seen the parts of the game that only 13% of the player base has been to (and with a trip to Sunwell tonight, will join the 7% club). My gear is mostly outranked by only T6 stuff, and even then only slightly. And most significantly, it's a pleasure to play with the other folks in my guild... there's a level of teamsmanshipiness that I haven't seen in a long, long time.

But the problem is that the game itself is pretty fscking boring now. Taking down a raid boss isn't really a matter of "how?" but rather "when?". Instance runs are basically just a matter of calling out a series of plays from the playbook, tactics depend more on the specialization of the other people with me than what the monsters can do, and party wipes are merely annoying moments that slow down the run rather than crushing defeats.

There's just something wrong when your team downs the Curator before he finishes his first Evocation round. It feels about as rewarding as beating up a 13 year old.

And so, barring meeting a Spurs cheerleader with a thing for guys who play undead prot warriors, I've decided to let the subscription run out in Sept and find something new to obsess over before I get to the point where I can't even stand to login anymore.

Email ThisBlogThis!Share to TwitterShare to FacebookShare to Pinterest
Labels: games

How about a site that just adds captions to pics pulled off of drudge report? 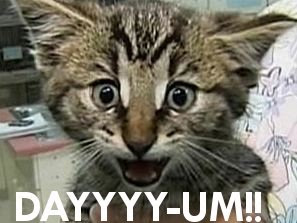 Email ThisBlogThis!Share to TwitterShare to FacebookShare to Pinterest
Labels: haha

where was that agile stuff?

Hackaday posted a link to waxy.org's online copy of Code Rush... a documentary about Netscape open sourcing Navigator and creating Mozilla. The amount of progress over the past decade on this code base is truly amazing when you step back and look at it from a historical perspective.

What I think is interesting is that you get a glimpse of the development process, which appears to be: controlled chaos. The only real metric they used was simply "are there any bugs left".

When I look at how much time we spend today fussing over which methodology to use or having to make "business cases" for the existence of software devs on the payroll, I can't help but wonder if the task of trying to explain and quantify software development in business terms isn't killing progress in getting-stuff-done terms.

For some funky reason, MS has decided to only offer two extremes when it comes to dealing with XML. You may either use the XmlTextReader method, which requires you to create your own parser from scratch, or you may use XmlDocument, which reads everything into memory and gives you a tree to work from. The problem with XmlDocument is that it will toss an exception on "malformed" (but acceptable to other XML parsers) XML.

It quickly turns into a gooey, tarry mess... especially if you have a 6000 line xml file that you know is malformed and you're trying to read it into a program so that you can fix it. /o\

I found a tutorial on how to build a simple DOM parser (along with sample code) in C# that helped me stop thrashing around with the nuances of XmlDocument and get going in about 20 minutes. Perfect for the Perl/Ruby/Python hacker caught in this strange world of strong types. :)
Posted by Unknown at 3:42 AM No comments:

So this past week, I've been hammered with a project that was "beneath muh skillz"... hand fscking editting HTML. A lot of HTML. It had to be done by hand because it was one of those situations where there wasn't a repeating pattern to latch onto. Each change needed human judgement to determine what the right thing to do was.

The mission at hand was rescuing a federal agency from a Congressional mandate. As of June 30th, federal agencies are expected to have their websites "508 compliant", which means that they have to be "accessible". Accessibility is generally the practice of making software or content available to someone who has a handicap such as being deaf (or maybe just partially deaf) or blind. Blindness is the big one because a website has to be convertible into text that can be read by a text-to-speech program or a braille terminal.

We managed to get a lot of the site fixed, but there was still the fundamental problem that certain content was just designed in a way that it's nearly impossible for someone stuck having to read a page from top-down, text only to use. Stuff where you click on a button and hidden caption text magically coalesces back into existence under an image in the middle of a page presents a real problem.

This isn't a call to arms or anything. I'm not demanding that we scrap Web 2.0 and head back to black-and-grey pages. But I do think that designers need to start thinking about it more and keep it in mind as they do their thing so that when they make choices the exclude entire segements of the population it's at least a conscious decision whose consequences can be noted (and possibly addressed later on).
Posted by Unknown at 3:20 AM No comments:

It was sitting in front of some lady's house off of Culebra. About 2 blocks away from gang land and a bunch of seedy looking muffler/used tire stores.

Worse, there was no damage to the truck. Anywhere. It was almost as if they had a key or something. No windows smashed, the steering wheel housing wasn't jacked up, not even a scratch on the ignition. The trip odometer had 57 miles on it, and they left me with a quarter tank of gas.

But hold on, it gets even worse. :( They left a leather jacket, some jumper cables, and a toolbox. They did score a broom, a couple of cd's, and smoked my last 3 Marlb's, but they were also nice enough to take out the garbage (Mickey D's and Sonics bags) I'd left in the backseat.

Even the spare tire's still there.

So why is this bad news? Because my car getting ganked obviously wasn't part of June's master plan. :( And that means, the ides haven't made their play yet.

Seriously. Who's ever heard of car thieves that actually clean your stuff up and only steal stuff worth less than $7?!? The only way it could have been better is if they'd taken it to a car wash and parked it back in the original spot.

Ah, well. In honor of the reunion and by way of saying, "Thanks for not being more of a dick than you had to be about this and I'm sorry for asking God to give you brain cancer every night this past week," here's some Gary Numan:

Posted by Unknown at 1:55 AM No comments:

I hate june with such a passion

So, this Shakespeare dude once wrote a play about Julius Caesar getting jumped by 12 senators or something. The most famous line from that play is "Et tu, Brute?", which is what Caesar (who I have to imagine is feeling kind of low about being knifed by 12 dudes) says to some dude named Brutus.

A slightly less famous line is "Beware the Ides of March", which is supposed to be some dramatic foreshadowing of the knife attack... ides is the middle of the month, and Caesar is teamkilled in the middle of March.

For me, it's been the Somewhere Around the Ides of Fscking June. If something unfortunate is going to happen, this is when it always seems to hit. Deaths of folks I care about, car wrecks, sickening crunching sounds coming from my ankle, system compromises, and Martian Crust Devils launching an invasion of Earth. All happen in June.

The Ides got off to an early start this year by having me do my own little rendition of "Dude, where's my car?" when I tried to leave for work this morning. 2 months ago, I'd finally snagged a Trailblazer LTZ with the color I wanted, the exact perfect feature set, and managed to finagle a more-than-reasonable price for it. Looks like someone else thought it was a good deal, too.

So I got to spend the day talking with cops, insurance people, and car salesman to get a replacement lined up. Ended up heading back behind the wheel of an F150, and I'm back in the land of V8's and wide turns. \o/

And I'm fully expecting this sucker to explode in a ball of flame on the 15th.
Posted by Unknown at 11:16 PM No comments: