I finally got around to checking out Diaspora: Shattered Armistice the other day.  It's a free game that basically gives you a good ole' X-Wing vs. TIE Fighter style flight simulator set in the Battlestar Galactica universe.  Download is about 1.3GB, and it support Win/Mac/Lin.The good stuff:  It's got both single player and multiplayer modes.  They obviously put a lot of thought into the game and there's a pretty good amount of detail.  Combat is hectic and "realistically fake" like the old X-Wing games were (ie, you let off the throttle and you stop moving, despite the fact there's no friction in space).The bad stuff: It's hellah complicated.  There are a lot of different buttons to push, not all of them make sense, and not all of them have anything close to an easy to remember mnemonic.  I'd also argue that it suffers from ARMA II's problem of having too many buttons to press and some of them could probably be merged into one key.  The craft are *very* responsive, which is cool, but in order to get all 6 degrees of control you need both the mouse and the keypad which makes flying kind of awkward.  It almost feels like you're trying to fly emacs.As for the production values, they aren't bad for a free game.  The scripts for the voice overs are actually pretty cleverly done to avoid that awkward "Anonymous rookie pilot, stop those planes!" situation.If you're looking for a complex combat flight sim that has a few rough edges, this might be right up your alley.  If you're looking for a quick, cheap yank'n'bank shooter thrill to blow off some steam, this probably isn't for you.
Posted by Unknown at 5:18 PM No comments:

ajax with jquery in rails

So I'm going back through the updated rails books in an effort to see what all has changed since I last poked at it (as it turns, quite a lot).  One of the big changes was the removal of RJS (rails javascript) and the move to jQuery.  Unfortunately, the new jQuery interface doesn't seem to be referenced in the doco I've got nor was it easy to get a straight answer from googling, checking the js console, or even good old alert() debugging.

A'ight.  I ran across some articles about off-center fed, sleeved dipoles for 2m and 70cm use.  They're cheap and fairly simple to make, which is right up my alley.  I was going to mess around with using some copper tubing, but this sucker is working well enough I don't think I'm going to bother with the copper (or I'll save it for another project).  Total price for this thing for me was around $12.

The original articles I referenced were KV5R's OCF Sleeve Dipole and W7LPN's 2M/440 Dual Band Sleeved Dipole Mod.  I ended up keeping the idea of the RF choke close to the bottom element, but went back to simply using aluminum tape on the outside of a PVC pipe.  Instructions after the jump, but here's a pic of the antenna in action: 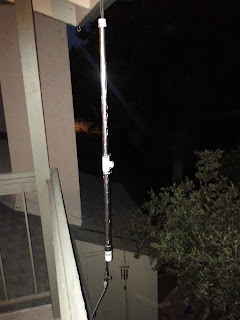 There's a reason it takes you years of study and practice to become a black belt: as much as you need to learn the skills of various punches and kicks, you also need to gain the experience of when to use them and the wisdom of choosing the right move for the right situation.  Although going around and using the Crying Dragon Death Touch as the opening move in every fight you get into is a valid strategy, it turns out that you will run out of sparring partners pretty quickly.  Yes you can learn the moves pretty quickly and achieve proficiency with them in short order, but without experience to guide your actions you are still just another n00b stumbling around and making messes.

And that's kind of how it was with my quick entry into the world of ham radio.

Email ThisBlogThis!Share to TwitterShare to FacebookShare to Pinterest
Labels: ham

I put up a post on g+ about getting some ham radio antennae on muh car and thought I would post some pictures in case anyone was interested.

The basic idea was to make something I could easily deploy and take down, so there wasn't a whole lot of hole drilling and a lot of stuff is in temporary locations.  Pictures and a talk-through after the jump.

Email ThisBlogThis!Share to TwitterShare to FacebookShare to Pinterest
Labels: ham

if it ain't documented, it ain't permanent