After I got back home, I made a quick to the library and ended up picking up way too many books.  One of them was How to Build Shaker Furniture by Thos. Moser.  The book has turned out to be a pretty good catalog of different joinery types, how to use fasteners, a good reference on stuff like types of wood, tools, etc.  Although I'm probably not patient or skilled enough to start in on some of the designs he's got, there are some pretty good inspirations in there.  I'm thinking this book needs to be on the bookshelf more permanently.

I also snagged Making Elegant Custom Tables by Doug Stowe.  While this book didn't have much in the way of plans and it was meant to be more of a pictorial survey of some of the author's work, it did have some nice explanations of the techniques he used (like how to build pedestals) and some of the tools he crafted (like a cylinder lathe).
Posted by Unknown at 6:37 AM No comments:

Email ThisBlogThis!Share to TwitterShare to FacebookShare to Pinterest
Labels: woodwork

Bottom line is that I'm down around 40lbs since I started the I-Can't-Believe-It's-Not-Atkins diet.

So, for the shed project I'm working on, we've gotten to the point where we need some doors on this sucker. I tried making a couple by simply screwing some 2x4's together like they were studs, but we quickly discovered that without a diagonal brace it's not stable. So unstable, in fact, that simply sinking a second screw at a corner could pull it out of shape. The diagonal worked, but it was a major pain to make adjustments to the door: finding out you need to shave off 1/8" means having to basically take the door apart to do the cut. There's also the problem that it's kind of hard to find threshhold flashing that's 3 3/4" wide. 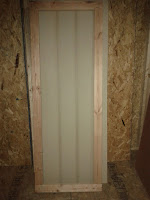 So, I decided to finally try out a lap join and just turning the 2x4's so their faces were to the front. It's a heck of a lot more work and takes longer, but holy cow was it worth it. I basically ended up with a much thinner door (1 1/2") that fits the flashing perfectly, is much lighter, doesn't need another brace, and is dead simple to get to 90 degrees in the corners.

Email ThisBlogThis!Share to TwitterShare to FacebookShare to Pinterest
Labels: woodwork

but i know what you want me to do

Been a while, but here we go. The Heavy - No Time:

Posted by Unknown at 7:14 PM No comments:

So, not quite a month since my post about weight loss, but figured that I'd go ahead and update anyway.

As we pushed on into June, I had managed to drop to 355 (lost around 30lbs in 2 months) and was feeling kind of cocky. On the 10th, I took a 3 day trip to the beach and induldged in carbs. When I got back home, I found I was at 370 and got pretty disheartened about the whole deal. It wasn't until earlier this week that I started getting back on the low carb regimen, and I'm now down to 362.

maybe that's why it's called spooky

So, I've been reading this quantum mechanics for idiots book recently, mainly because I'm a nerd but also because everyone time I've tried to talk with someone In the Know(tm) about QM I get a "don't worry about it" in response. The book I'm reading is Quantum: A Guide for the Perplexed by Jim Al-Khalili and it does a pretty good job of both not descending too far into the mathematics and acknowledging that basically everything is counterintuitive and the natural response is to say "no wai! lies!".

Any rate, my big epiphany was that everything at the atomic level appears to be indeterministic. Which is highly unsettling because all that stuff we learned in high school is based on the assumption that we live in a deterministic universe: that you can know everything about anything and make predictions accordingly. We've used these tools to split the atom, go to the moon, approximate how long ago dinosaurs roamed the earth, hurl data around the globe, and create machines that can peer inside your head and let a doctor see if blood vessels in your brain are healthy or not.

And it's basically all been an approximation.

Posted by Unknown at 1:16 AM No comments:

Email ThisBlogThis!Share to TwitterShare to FacebookShare to Pinterest
Labels: geek

So, I've mostly completed the frame for the "Mark III" version of the laser table. I decided not to use the previous version because of a change in options to mount the lasers. The drafting table just didn't have enough space for the flush mounts.

The features of the new table are:

* built from 2x4s so it's sturdier (but also heavier)
* the table top is hinged and has legs built in so it can be used flat or lifted to be an angled surface
* used pocket screws to hold stuff together... looks less "engineery" while joins are stronger

What remains to be done:

* figure out some way to mount stops for the tabletop legs to hold it at an angle
* cut some mounting rabbets out of moulding to hold the plexiglass surface just below the center of the laser beam
* cut the plexiglass down to fit in the rabbets :)
* mount the flush mounts at the correct angle to cover the entire surface
* rejigger electrical stuff to run off floppy disk power lead
* see if running lasers in series will work better than in parallel (currently using the parallel setup)
* wax paper on acrylic and see if the projector works

Then I can start on the software phase.

I should probably also think about attaching a trap for the laser light at the edge of the tabletop, but for right now I just want this sucker to work.

Way more info after the jump.

a month of data

A month ago, I made some changes to my diet after my doc ominously dropped the D word. Basically, I've started doing an Atkins-like program... still trying to keep carbs to 20g or less per day, but I haven't been following it as strictly as I could have. End results is that I've lost around 18.2 pounds in a month's time.

Okay. So my last swipe at this wasn't technically a table, but give me a break. I got busy and couldn't find spare time for... 18 months. /o\

Any rate, I've been on a kick lately and I'm moving away from doing stuff on my computers and moving more towards the analog method of designing stuff: grabbing a damned pencil and a sheet of paper and just sketching it out. I don't know why, but when I write/draw something I seem to retain it for a much longer time than if I type it up. Part of this has led to a desire to get a good old drafting table. But why buy a solid pre-built one when you can build a shaky, hideous one from scratch and save $20?

So I set about designing a drafting table, and about halfway through it occurred to me that I could also fashion it so that I could remove the plywood table top and slide in a sheet of plexiglass later on to easily convert it to a multitouch table later on.

Since it's been 18 months... here's a link to previous multitouch posts (read from bottom up for chronological order).

And here is a link to the Mark II.

It's not as perfectly aligned as I would like it, but I don't think it's half bad for my first woodworking project EVAR and it's sturdy enough I can lean on it. More thoughts after the jump.

If anyone is interested in plans (although it's not that complicated) or has questions about the construction.. hollah.

I was once watching a game with a friend who was new to (American) football who overheard the commentator use the phrase "2 minute offense" and wondered what it was. Being more interested in the game, I brushed it off with the quick explanation: it's an offensive play scheme designed to move the ball down the field as fast as possible so you can score before the end of the quarter.

My friend waited for the play to run and then asked, "So why wouldn't you do that for the other 13 minutes in the quarter? Isn't the point of the game to score the most points?"

On the surface, it's a good question, but when the theory is reduced to application we find that it's a bad idea because it's resting on some very, critically, super star-level bad assumptions that you made when trying to think about the problem in the abstract.

The truth is that the 2 minute offense can be a wise gamble, but it's a poor standard operating procedure for the same reasons that "crunch time" is a bad thing for software development.

back to the gym

I lead a pretty sedentary life, and thanks to OpenVPN and being able to work from home, it's gotten even more sedentary since at least work has stairs you have to go up. While I knew I needed to do something, it wasn't until I got winded heading up the apartment stairs with some laundry on Sunday that I realized it was go time. On Monday, I swung by Anytime Fitness took a quick tour, and signed up for the month-to-month plan... end results is that it's around $43/month, but I have 24 hour access to the gym via nifty key fob you swipe at the door. After a month or so, databases get sync'd up and the fob will work for any AF gym in the US. Pretty slick.

This isn't the first time I've tried to get back into a gym, but it's the first one where I'm not trying to think up a reason to procrastinate going until it's too late. I've also made a few changes to my approach for getting back into the swing of things that I think are helping.